While renovating an institutional building in Jasper, our client uncovered a need to expand an existing ventilation shaft to accommodate a new commercial kitchen hood.  The challenge was this: expanding the shaft would involve interrupting an existing light-frame wooden floor truss.  To make matters worse, the project was on a tight timeline, and therefore, required a timely solution to be developed on short notice.

Headwall Engineering was able to provide structural engineering services on short notice to model and assess the existing trusses, before developing a reinforcement and framing plan to allow one truss to be interrupted.  Headwall’s framing design was simple, and resulted in a floor structure that is now stronger than the original structure.  Headwall reinforced the top and bottom chords of the neighbouring trusses, provided framing to bridge the interrupted truss’ loads into its neighbours, and also assessed connection forces to ensure that they did not exceed the capacities of the metal connection plates.

Our client was quite pleased with Headwall’s performance, saying:

Below are a few photographs of the modifications:

FEM Model of the Truss & Neighbours 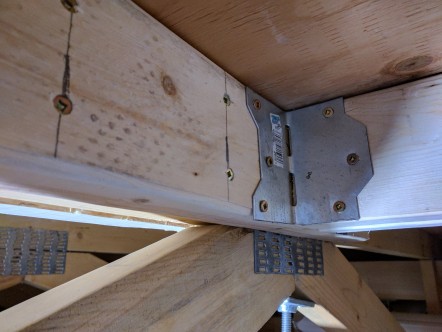